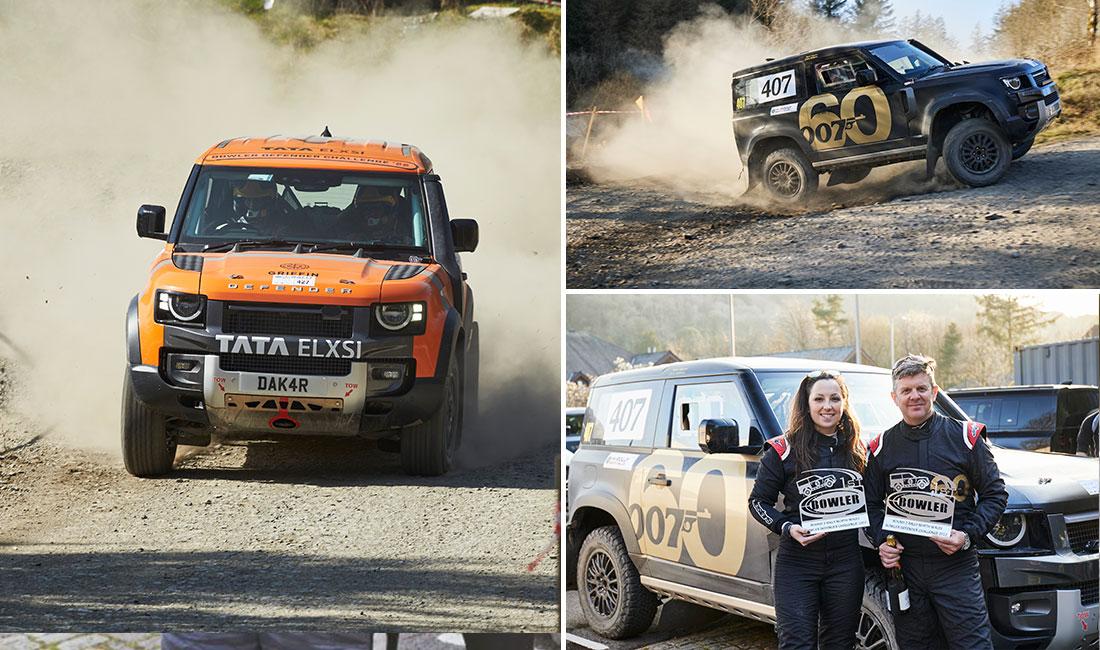 Running as a special class within the main Rally North Wales event presented the Tata Elxsi Bowler Defender Challenge competitors with a new set of challenges. The event format was, for many, the first time they had entered an event of this type. Running over 8 special stages, with road liaisons this was the first session where the competitors would see the course for the first time as they entered it – with no practice or familiarisation laps. Added to the intensity was the tight time management required in rallying, giving co-drivers their biggest challenge to date.

Higgins, who won the British Rally Championship in 1997, 2005 and 2006 and Williams, who took the 2013 Overall and Junior Championships, were seeded first in class and led the Bowler Defender pack down to the first special stage. The production-based, Fox suspension-equipped Bowler Defenders handled the event’s fast gravel stages competently, with the Higgins/Williams car soon being chased down by the pairing of Dan Beecroft and Philip Gillespie. Previous round winner Jamie Thwaites, partnered by Chris Cuming, continued to close on the leading pair throughout the morning’s stages. An incident on special stage four for Higgins/Williams saw the Bond-liveried car reach service in need of repair to front left suspension and threw the competition wide open at the half-way point.

A 50 minute service session saw the pit crews under pressure to replace Higgin’s damaged suspension with the rest of the field only requiring minor service attention. After a swift turn-around all cars headed back out to repeat the stages in the afternoon sun. Miles Williams and Paul Chambers, in car number 425 built on the morning’s experience to pick up the pace, as Lee Caroline and Syd Phillimore posted stage times to move themselves up the leaderboard. The pairings of Fraser Williams/Mark Acher and Dave Beecroft/Fraser Parish also improved on their earlier stage times as they gained experience in the stage terrain.

Bowler Head of Motorsport, Dave Marsh commented “It has been a fantastic event, with the Tata Elxsi Bowler Defender Challenge performing well at the Rally North Wales. For a lot of our competitors it is the first time they have experienced these kind of fast gravel surfaces. This is really where all of the training comes together, from tight time management, new surfaces to compete on, and the pressure of being in a much bigger field. I think that every single competitor excelled – and everyone learnt new skills. These conditions have really bought the teams together, and the support from the Bowler pit team has been incredible. Congratulations to not only Mark and Claire – but to the rest of the field. We have had 100% finishers – and that’s not an easy accomplishment. The cars have performed well and the teams have worked hard to get their results. We’re looking forward to the next round at the end of May to do it all again!”

The next round of the Tata Elxsi Bowler Defender Challenge will be held at the Welsh Borders Hill Rally 2022 on 27th, 28th and 29th May 2022.